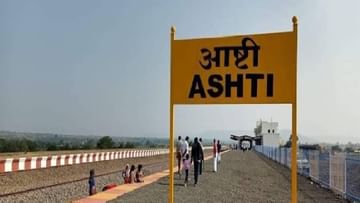 The Nagar-Parli railway line was to connect not only the two districts but also Western Maharashtra and Marathwada. Therefore, in 1984, it was demanded that this railway line should be built.

Nagar-Ashti railway line has been completed and this line will be inaugurated on Friday.

Kunal Jaykar, Representative Ahmednagar: As in Marathwada (Marathwada) Latur’s hot water issue is in the news, similarly, Bidkar’s Railway (Beed Railway) When the dream was going to come true. Nagar-Parli, which has been in discussion for the past 38 years (Nagar-Parali) The first phase of the railway line is being completed. The first phase of 67 km from Ahmednagar to Ashti has been completed. On Friday, Chief Minister Eknath Shinde, Deputy Chief Minister Devendra Fadnavis, Revenue Minister Radhakrishna Vikhe-Patil, Pankaja Munde, Mr. The railway line will be inaugurated by showing the green flag in the presence of Pritam Munde.

There has been a demand for the completion of the Ahmednagar to Parli railway line for the past several days. The issue of this railway line was prominent only during the elections. Many gained power by politicizing this railway, but the question remained. Now the first phase of the same railway line has been completed.

The Nagar-Parli railway line was to connect not only the two districts but also Western Maharashtra and Marathwada. Therefore, in 1984, it was demanded that this railway line should be built. After that, this route, which has been neglected forever, is finally being inaugurated.

In the meantime, BJP’s Gopinath Munde and Congress’s Vilasrao Deshmukh demanded at the central level that the route was finally approved. Even after that, after overcoming many difficulties, the inauguration is finally taking place tomorrow.

Students tend to go to Pune for education along with agriculture. Until now, the students were being inconvenienced due to lack of basic facilities. Now that the railway is starting, at least the problem of Ashti and the students in the area will be solved.

West Zone 4 Wickets away from winning the title MIGMG News

girl kidnapping case news, a plan to kidnap a girl walking on the road; A rickshaw driver attempted to abduct a 13 year...

With a speed of 100 km per hour in 52 seconds, the Vande Bharat Express outperforms the Japanese bullet train MIGMG News