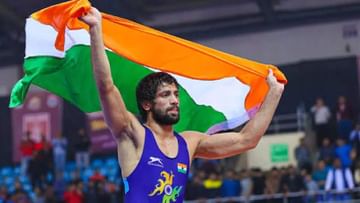 Ravi won the medal in the final on Saturday. Dahiya won this match 10-0. Ravi defeated Suraj Singh of New Zealand and reached the final round. Ravi took 2 minutes 16 seconds to win the final

New Delhi : Tokyo Olympic silver medalist Ravi Dahiya (Ravi Dahiya) has announced the Commonwealth Games-2022 (CWG 2022) won gold medal in men’s 57 kg weight category (Gold Medal) has won. Ravi won the medal on the basis of technical efficiency in the final round on Saturday. Ravi Dahiya won this match 10-0. Ravi defeated Suraj Singh of New Zealand and reached the final round. Ravi Dahiya took 2 minutes 16 seconds to win the final. Ravi Dahiya knew his opponents were weak on the legs so he wanted to grab the legs. In the meantime, the Nigerian player attacked but Ravi showed a strong game and stopped him. Meanwhile, Ravi was warned by the referee for inactivity. From here Ravi showed his strength and won two points and then grabbed his opponent’s legs and rolled them up to make the score 8-0.

for the first time…

Ravi is the first wrestler to perform a miracle. He played the Olympics for the first time and went beyond expectations to win the silver medal for the country. No one expected Ravi to win a medal in Tokyo Olympics-2020 but he made it to the finals and managed to win the silver medal. Similarly, he was playing Commonwealth Games for the first time and managed to win a gold medal in his very first Games. Here, however, he was hoping for a gold medal, which he achieved. Apart from this, he has been successful in winning three gold medals in the Asian Championships. He has a bronze medal at the World Championships. He was successful in winning a silver medal at the World Junior Championships.

Love the tricolor! Jalebis, awards and speeches… these memories of Marathi actors will take you to school too – independence day marathi actors...