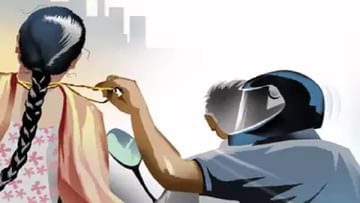 In two days, the police have registered cases of robbery of three pedestrians and cases of chain snatching in two places. A complaint has been filed in various police stations in this regard and the police are searching for the accused.

Increase in incidents of robbery of pedestrians in Dombivli

Dombivli / Sunil Jadhav (Representative): Pedestrian robberies in Dombivli have increased. The robbers hit pedestrians at five consecutive places (Pedestrians) has looted and embezzled lakhs of rupees. Interestingly, the number of victims of robbers is higher among women. In two days, the police looted three pedestrians (Loot) while five chain snatching in two places (Chain Snatching) has been registered. A complaint has been filed in various police stations in this regard and the police are searching for the accused.

The event is as follows

Ashok Haribhau Khilari, 59, a resident of Dhvani Society in Dombivli East Public Road, Tilaknagar, was passing through the lane of the Human Welfare Center. The said rickshaw puller took away 10 thousand cash from Ashok’s bag and escaped.

In the evening, 65-year-old Vanita Kuttadkar, who lives in Sant Namdev Path Suvidha Society in Dombivli East, was shopping for vegetables with a woman living next door. The two robbers who came on a two-wheeler in the alley of the kerosene depot slapped Vanita and pulled a chain weighing 4 grams worth 15 thousand rupees from her neck.

52-year-old Sujata Srinivas Jinral, a resident of Shreesneh Society in Dombivli Ramnagar area, was passing under the Tata Power Line with her husband around 9 pm. At this time, the robbers who came on a two-wheeler pulled Sujata’s mangalsutra worth 75 thousand rupees weighing two and a half tolas from her neck.

A 39-year-old woman named Shubhangi Shinde was waiting for a rickshaw after leaving HDFC Bank at around 3:30 pm on the 22nd in Kalyan Sheel Road area. Shubhangi kept two lakh ten thousand rupees from the bank and Rs. At this time, the robbers ran away with the bag in their hands on the bike that came from behind.

75-year-old Vimal Sorte, a resident of Manpada Road area of ​​Dombivli, was walking on Dombivli Char Road after leaving work when two strangers pretended to know him. The accused then engaged them in talking and asked them to tie the body ornaments in a cloth, pretending to put them in a bag and absconded.