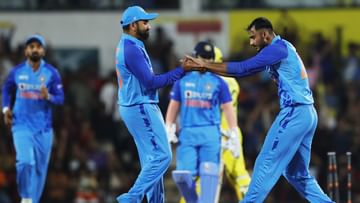 IND vs AUS T20: After losing the first match, now Team India has made a new formula against Australia. Team India has given an opportunity to both of them. Both of them have also been given dutch.

New Delhi : in Nagpur (Nagpur) of India against Australia (IND vs AUS T20) The match has started. The match was already hampered due to rain. As the ground was wet, the match started at 7:30 PM. So this time this match will be played in eight overs. After losing the first match, now Team India has made a new formula against Australia. In this, Team India (Team India) has left out Umesh Yadav and Bhuvneshwar Kumar and given chances to Jasprit Bumrah and Rishabh Pant.

Team India has now made two major changes in the playing eleven. Bhuvneshwar Kumar and Umesh Yadav have been excluded.

Who has a chance?

Know the playing XI of both teams….

2⃣ changes for #TeamIndia as @RishabhPant17 & @Jaspritbumrah93 are picked in the team. #INDvAUS

A look at our Playing XI 🔽 pic.twitter.com/Lgh5KVZ95L

Team India has lost the first match in the three-match T20I series against Australia. So now the focus of team India is going to be to win today’s match. For this, the team has changed the playing eleven and the new formula of the team has also come to the fore.

Team India was criticized for bowling in the last match. Considering all these, Team India has made changes.

INDW vs ENGW, 3rd ODI: Jhulan Goswami gets ‘Gaurd of Honor’ from England women’s team in her latest international round MIGMG News

Karnataka government absorbs state anthem in two and a half minutes, and puts the finishing touches on elegance MIGMG News