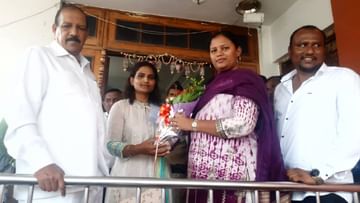 The District Health Administration is making a dilemma for the office bearers of the Community Health Officers Association here. Apart from this, since the comforts provided by the government are neglected, a fight is now being waged against this injustice.

As injustice was being done by the district health department, the officials of the health organization had directly reached the door of the tribal development minister.

Jitendra Baisane TV 9 Nandurbar : Arbitrary administration of district health administration is no longer hidden. Not only the patients and their relatives suffer, but the health officials here are also not spared from this. Against the financial injustice of the District Health Administration, the Community Health Officer directly appealed to the Minister of Tribal Development Dr. Vijaykumar Gavit and Mr. Dr. Heenatai has gone to Gavit’s door and expressed her sorrows. They have also demanded to stop the exploitation.

The District Health Administration is making a dilemma for the office bearers of the Community Health Officers Association here. Apart from this, since the comforts provided by the government are neglected, a fight is now being waged against this injustice.

Here are the demands

* According to government rules, it is mandatory to pay the basic salary by the 5th of the month and incentive amount by the 10th of the month. Moreover, when it is necessary to give more allowance to those performing duties in remote areas, it is being ignored.

* Two months salary is being retained. Therefore, there is a time of starvation for the employees. A similar policy is being implemented for the past several days. Officials of this organization are now demanding a solution to this.

* An increase of 5 percent is fixed in the salary of the employees every year. Even though 3 years have passed, the employees have not received the increase in their rights. Salaries are not paid on time, let alone increased wages.

* Some indicators in Incentive are offline. Despite this, the remuneration of the employees is being reduced. So there are insufficient resources to provide health services.

* It is necessary to work according to 15 indicators according to the rules of the government. Expected increase is not achieved even with additional work load. So there is a huge reduction. As a result the employees are suffering financial loss.