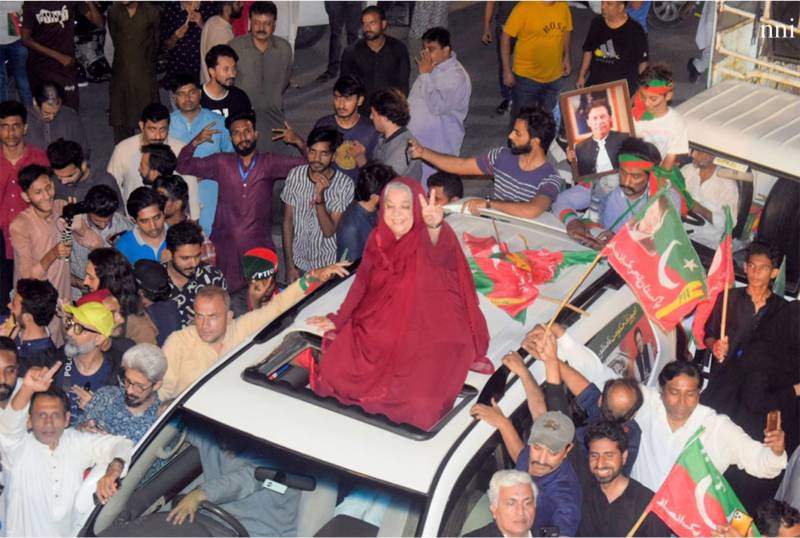 LAHORE – Pakistan Tehreek-e-Insaf on Saturday organized a protest rally from different areas of Lahore to Liberty Chowk against the PDM coalition government and rising inflation here in Lahore.

Thousands of workers and officials from all over Lahore participated in the rally on the call of PTI Chairman Imran Khan. Protest was held against unemployment and huge increase in electricity bills. The central and provincial leadership of Lahore including members of National and Provincial Assembly, town presidents and women and youth participated in the demonstration in large numbers. They were carrying banners and placards with slogans against inflation prescribed on them. The protesters also shouted slogans against the federal government. A big screen was also displayed at Liberty Chowk to show the live speech of Imran Khan. The former premier’s speech started at 8 pm. As soon as his address began, the protesters at Liberty Chowk raised slogans in favor of Imran Khan.

President of Central Punjab Dr Yasmin Rashid, Senior Minister Mian Aslam Iqbal, Local Government Minister Mian Mahmoodur Rasheed, Secretary Information Central Punjab Andleeb Abbas, Sheikh Imtiaz and other leaders, including Zubair Niazi addressed the demonstration. The leaders said that the federal government has sunk the raft of the country’s economy in six months and the government had made the lives of the people miserable with the burden of extreme inflation. The national reserves have decreased to an alarming level. They further said that Shahbaz Sharif and Hamza Sharif were going to be punished.

“An imported government has been imposed on the country under a conspiracy. Most of the ministers in the federal government are involved in corruption and looting. Many federal ministers including the prime minister are on bail. The federal government changed the NAB law as soon as it came to power and benefited itself by Rs1100 billion. The speech of Shehbaz Sharif in the General Assembly has caused embarrassment to Pakistan in front of the whole world. There has been a flood in the country while Shehbaz and his ministers are enjoying lavish lives in the most expensive hotels of America. The incumbent federal government should be ashamed for doing this,” they added.

In their address, the leaders further said that the incumbent imported government had proved to be no less than a punishment on the poor people. The inflation and the high taxes in the electricity bills have made the common man cry. The govt is taking its last breath. Criminals, robbers and looters are getting relief while the 22 crore people are suffering. Shehbaz and Zardari gang have made the life difficult for the citizens. Time has come for the nation to initiate a long march towards Islamabad under the leadership of Imran Khan to get rid of this federal government. The long march will be such that even the generations of imported rulers will remember. The inflated petrol, taxes and electricity bombs have been dropped on the people. They have no justification for doing their actions, the leaders said.

Aftab, the accused in the case of Shraddha’s murder, will again undergo a polygraph test today MIGMG News