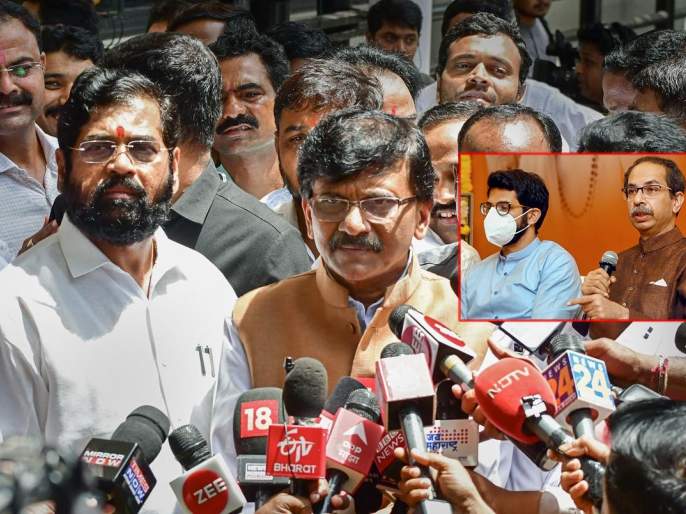 Mumbai: Chief Minister Uddhav Thackeray waited for Matoshri from Varsha Bungalow. Appealing to the people of the state and Shiv Sainiks, he said that he was ready to resign from the post of Chief Minister and also from the post of Shiv Sena party chief. After that, a large crowd of Shiv Sainiks had gathered outside Matoshri Bungalow in Mumbai. An emotional atmosphere has been created among Shiv Sainiks in the state. In addition, Shiv Sena’s mouthpiece has also warned the rebel MLAs targeting BJP.

No one can predict the end of political developments in Maharashtra. In it, His Excellency the Governor Mr. Koshyari was devoured by the Corona. As a result, the opposition parties in the state stopped at the Raj Bhavan. What exactly will happen to the state government? There are bets on this. Shiv Sena split, government in crisis, what will happen now? This is being discussed. In politics, everything is unstable and the majority is more fickle. MLAs who were elected on Shiv Sena tickets, money and hard work fell into the clutches of BJP. He first went to Surat and then to Assam on a special flight. Why are these MLAs running so fast? The developments under Shiv Sena. “We have nothing to do with him, etc. BJP should not do anything with Makhla,” said the headline of the match.

Nitin Deshmukh, MLA from Akola, returned to Mumbai from Surat and told a shocking truth about what happened. The Bharatiya Janata Party has started secret meetings to establish power in Maharashtra. Waves of excitement have risen over the ‘Sagar’ bungalow in Mumbai and the face of the wave has gone to the nostrils of many, but on whose strength does the BJP want to form a government? Urban Development Minister Shinde and his accompanying MLAs will have to come to Mumbai first. At the time of the vote of confidence, the steps of Vidhan Bhavan will have to be climbed keeping in view the eyes of the Maharashtrian people. Shiv Sena nominated candidates and got them elected diligently and now why are you being dishonest with Shiv Sena? This question has to be answered. Whatever happens in the legislature will happen, but the popularity of Uddhav Thackeray as the Chief Minister is at its peak. The article says that Uddhav Thackeray is popular among the people.

… so the masses will not survive without defeating them

Shiv Sena’s organization is strong. Due to this, the people who went to Assam in a ‘separate group’ became MLAs. If all these MLAs face re-election, the people will not survive without defeating them. These churches are not unaware of this. Therefore, these Shiv Sena MLAs and Namdars will return home again. Will join the stream. Today, the BJP, which is holding them like a sore on the palm of their hand, will throw them in the trash again when the need arises. This is the tradition of BJP. So no matter how hard one tries, the storm will clear and the sky will be clear. If anyone has dreamed of forming a new government in Maharashtra, it is their dream.

That is what the history of rebellion in Shiv Sena says

It has now been revealed who got the ‘extra’ victory in the Rajya Sabha and Legislative Council elections. Now the MLAs are being held hostage. Returning Nitin Deshmukh clarified that he has been kept under the sword of terror. Shiv Sena has digested many such incidents, Shiv Sena stood on the chest of such crises. Digested victory-defeat. An organization like Shiv Sena does not care whether it is in power or not. It will make a difference to the BJP’s temptations and the MLAs who have fallen victim to pressure. If the Shiv Sainiks decide, all these people can become ‘ex’ forever. That is what the history of the earlier rebellion says. The advice at the end of the article is to be careful and wise in time.